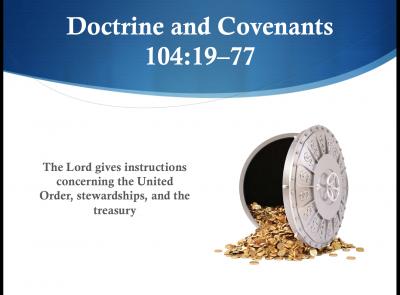 A 26-slide PowerPoint Presentation for the Seminary Lesson 109: D&C 104

A 26-slide PowerPoint Presentation for the Seminary Lesson 109: D&C 104

"In the spring of 1834, the Church was having financial difficulties, and efforts to collect funds for its relief had failed. In March 1832, Church leadership in Ohio had established an organization called the United Firm to manage the Church’s commercial, mercantile, and business interests in a way that would help establish Zion and care for the poor. In April 1832, Joseph Smith and others had met with the Church leaders in Missouri and organized a branch of the United Firm in Jackson County. These two branches—one in Ohio and one in Missouri—had continued for two years. In a meeting held on April 10, 1834, the members of the firm decided to dissolve the organization. However, Joseph Smith received a revelation about two weeks later “that the firm instead be reorganized” and that “its properties were to be divided among members of the firm as their stewardships”. Under Joseph Smith’s direction, the term “United Firm” was later replaced with “United Order” in this revelation. The Lord also counseled Church leaders regarding their debts and instructed all Church members how they were to care for the poor." [Introduction from the online lesson at lds.org]