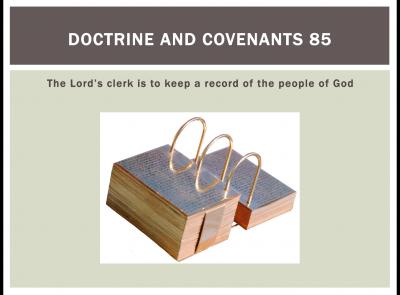 "In late November 1832, some Saints had moved to Zion but had not consecrated their properties as the Lord had commanded. Because they had not consecrated their properties, they had not received their inheritances according to the established order of the Church. The Prophet Joseph Smith addressed this issue in an inspired letter to William W. Phelps, dated November 27, 1832. A portion of this letter is recorded in Doctrine and Covenants 85. Later, on December 6, 1832, Joseph Smith received the revelation recorded in Doctrine and Covenants 86 as he was working on the inspired revision of the Bible. This revelation provided further explanation of the parable of the wheat and the tares and the role of the priesthood in helping the Lord gather the righteous in the last days." [Introduction from the online lesson at lds.org]