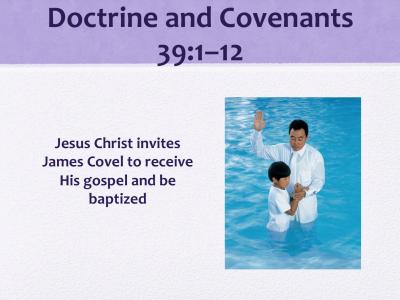 "In January of 1831, a Protestant minister named James Covel met with Joseph Smith in Fayette, New York, and “covenanted with the Lord that he would obey any commandment that the Lord would give through his servent Joseph”. The Lord’s response is recorded in Doctrine and Covenants 39. In the revelation, the Lord called on James Covel to be baptized and to preach the fulness of the gospel in Ohio. However, the day after the revelation was dictated, James Covel left Fayette and “returned to his former principles and people”. The Lord then gave a revelation to Joseph Smith and Sidney Rigdon explaining why Covel had not obeyed the commandments given to him. The revelation is recorded in Doctrine and Covenants 40." [Introduction from the online lesson at lds.org]