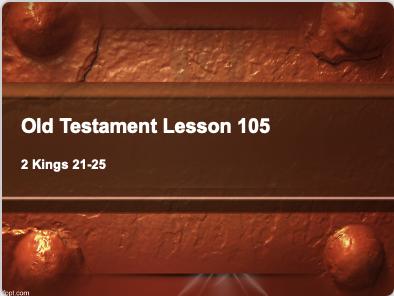 Under the reign of kings Manasseh and Amon, the kingdom of Judah engaged in wicked practices of idolatry. When Josiah became the king, he used the book of the law to call the people to repentance. After Josiah was killed in battle, the next four kings led Judah back to wickedness. Under the reign of King Zedekiah, Jerusalem was destroyed and the people taken into bondage in Babylon. Before Jerusalem was destroyed, many prophets, including the prophet Lehi, were sent by the Lord to warn the people that they must repent or face the destruction of Jerusalem (see1 Nephi 1:4, 18).

It includes the object lesson about the dish and the rag - be ready to bring a dish and rag and some animal crackers for the demonstration.