While taking a Hand-Built Ceramics class at the University of Utah in Fall 2001, my final project was a teapot that was supposed to have either a fantasy, autobiographical or political statement theme.  I chose to use a combination fantasy/autobiographical design concept based on one of my favorite fantasy childhood storybooks, Where the Wild Things Are, by Maurice Sendak.  I both read this book as a child and read it to my own children as a parent so often I had it memorized.  I loved the artwork and the perfect storytelling cadence of this marvelous picture book. 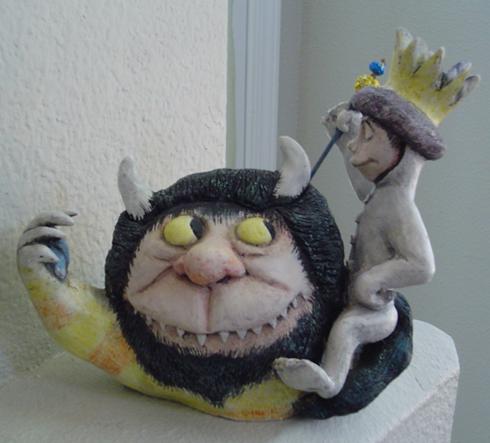 The main character in the story is Max, who dons a wolf suit and manages to be relegated to his bedroom for insubordination, where he drifts off to a dream-world full of fantastical wild things that he faces with fearlessness and earns the title of King!

If it isn't enough that I relish this book, I named my second son Max. That adds to the autobiographical nature of the project.

Great fun was had in taking the 2-dimensional illustrations to create a 3-dimensional clay object.  Also, keep in mind, it had to be a functional teapot!  I combined one illustration with a monster holding out his arm (to serve as spout) with another illustration of King Max (serving as handle) on the shoulder of a different monster, to create this hand-painted teapot.  The top of the monster's head, with horns, is the lid.

Someday I hope to make a sugar bowl and creamer to complete a whole Wild Thing tea set!