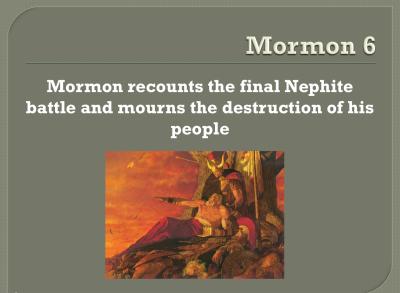 A 27-slide PowerPoint Presentation for the Seminary Lesson 139: Mormon 5-6

A 27-slide PowerPoint Presentation for the Seminary Lesson 139: Mormon 5-6

"Mormon prophesied that his record would come forth in the last days to persuade those who read it that Jesus is the Christ. He encouraged those who would read the record to repent and prepare for their own judgment before God. Among his own people, Mormon reconsidered his resignation as the Nephites’ military commander, agreeing to lead them in battle again. However, the people refused to repent, and they were pursued by the Lamanites until the entire Nephite nation was destroyed. As Mormon looked upon this scene of death and destruction, he lamented the fall of his people and their unwillingness to repent and return to Jesus Christ." [Introduction from the online lesson at lds.org]