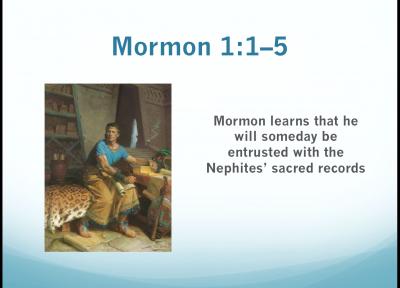 A 27-slide PowerPoint Presentation for the Seminary Lesson 137: Mormon 1-2

A 27-slide PowerPoint Presentation for the Seminary Lesson 137: Mormon 1-2

"Although Mormon grew up in a time of great wickedness, he chose to be faithful. Because of his faithfulness, he was told that he would be entrusted with the people’s sacred records later in his life. At age 15, he was “visited of the Lord”. He desired to help the Nephites repent, but because of their willful rebellion he was forbidden by the Lord to preach to them. At this young age, he was appointed to lead the Nephite army. Because many of the Nephites had lost the Holy Ghost and other gifts of God, they were left to their own strength as they battled the Lamanites." [Introduction from the online lesson at lds.org]