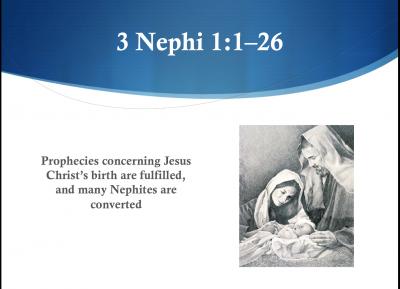 A 27-slide PowerPoint Presentation for the Seminary Lesson 116: 3 Nephi 1

A 27-slide PowerPoint Presentation for the Seminary Lesson 116: 3 Nephi 1

"When the time drew near for the fulfillment of Samuel the Lamanite’s prophecy about the Savior’s birth, believers watched for the sign Samuel had said would come. Unbelievers threatened to kill the believers if the prophecy was not fulfilled by a certain day. Nephi, a son of Nephi and grandson of Helaman, pleaded with God in behalf of the believers. In answer to Nephi’s prayer, the voice of the Lord came to him, declaring that the sign would be given that night. When the sun set, there was no darkness, and a new star appeared. Despite Satan’s continued attempts to destroy the faith of the people, the majority of the people were converted to the Lord. But two years later, the Gadianton robbers began to lead many Nephites and Lamanites into wickedness." [Introduction from the online lesson at lds.org]