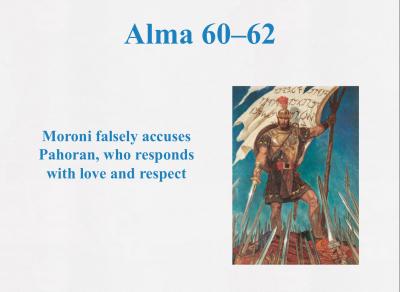 A 24-slide PowerPoint Presentation for the Seminary Lesson 105: Alma 59-63

A 24-slide PowerPoint Presentation for the Seminary Lesson 105: Alma 59-63

"Captain Moroni rejoiced in Helaman’s success in regaining some of the Nephite cities that had been lost to the Lamanites. However, when he learned that the city of Nephihah had been captured by the Lamanites, he was angry at the government for neglecting to send reinforcements. In a letter to Pahoran, the chief judge, he lamented the suffering of the righteous and rebuked Pahoran for not supporting the cause of freedom. Unknown to Moroni, Pahoran had fled to the land of Gideon because of the rebellion of the Nephite king-men. Pahoran did not take offense at Moroni’s chastisement; rather, he rejoiced in Moroni’s love of liberty. The Lord strengthened the Nephites, and together, Moroni, Pahoran, and their people defeated the king-men and the Lamanites. After several years of war, the Nephites again experienced peace, and Helaman reestablished the Church." [Introduction from the online lesson at lds.org]