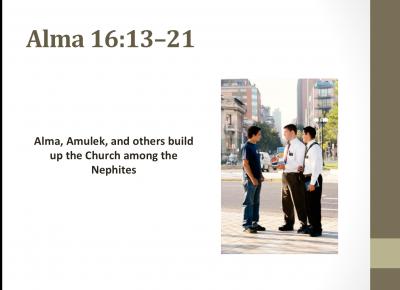 A 22-slide PowerPoint Presentation for the Seminary Lesson 80: Alma 15-16

A 22-slide PowerPoint Presentation for the Seminary Lesson 80: Alma 15-16

"After the Lord delivered Alma and Amulek from prison, they went to preach to the people in the city of Sidom. There they found the believers who had been cast out of Ammonihah, including Zeezrom, who was suffering physically and spiritually because of his sins. When Zeezrom declared his faith in Jesus Christ, Alma healed him and baptized him. Alma established the Church in Sidom, and then he returned with Amulek to Zarahemla. In fulfillment of Alma’s prophecy, the Lamanites destroyed the city of Ammonihah in one day. In addition, the Lamanites captured some of the Nephites from surrounding lands. Choosing to follow Alma’s prophetic guidance, the Nephite armies recovered the prisoners and drove the Lamanites from the land. During a period of peace, Alma, Amulek, and many others strengthened the Church throughout the land of the Nephites." [Introduction from the online lesson at lds.org]