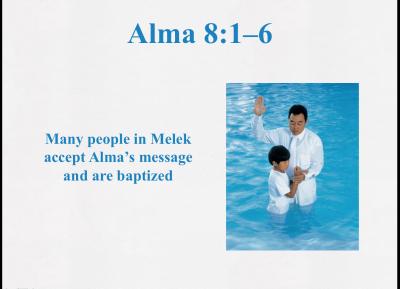 A 25-slide PowerPoint Presentation for the Seminary Lesson 74: Alma 8

A 25-slide PowerPoint Presentation for the Seminary Lesson 74: Alma 8

"After many people accepted Alma’s message in Zarahemla, Gideon, and Melek, the people of Ammonihah rejected Alma and cast him out of their city. As Alma grieved for the wickedness of these people, the same angel that had appeared to him and the sons of Mosiah came to him again. The angel commended Alma for his faithfulness and commanded him to return to Ammonihah. Alma faithfully obeyed the Lord’s commandments, and the Lord called Amulek to assist him in his ministry. Alma and Amulek faithfully set out to teach the people of Ammonihah, filled with the Holy Ghost and power to do the Lord’s work." [Introduction from the online lesson at lds.org]