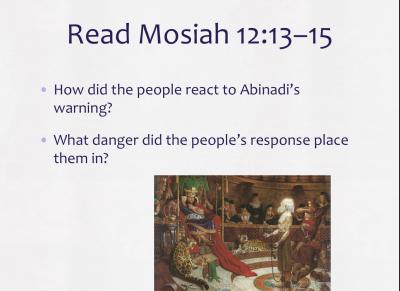 A 27-slide PowerPoint Presentation for the Seminary Lesson 62: Mosiah 19–20

A 27-slide PowerPoint Presentation for the Seminary Lesson 62: Mosiah 19–20

"After Alma and his people evaded King Noah’s army, King Noah and his people began to suffer the consequences of their unrighteousness, as prophesied by Abinadi—they were attacked and brought into bondage by the Lamanites, and King Noah suffered death by fire. Noah’s son Limhi became king after Noah’s death. When the former priests of Noah abducted a group of Lamanite daughters, the Lamanites blamed Limhi’s people and prepared to attack them. Limhi’s people fought valiantly, and they injured and captured the king of the Lamanites. Limhi pacified the Lamanite king, who then persuaded his people to return to their own land in peace." [Introduction from the online lesson at lds.org]