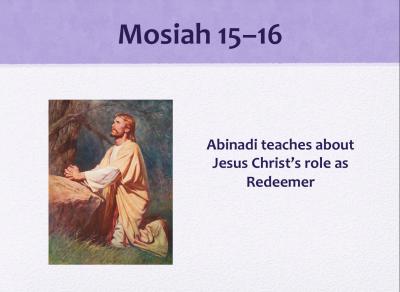 A 31-slide PowerPoint Presentation for the Seminary Lesson 60: Mosiah 15–17

A 31-slide PowerPoint Presentation for the Seminary Lesson 60: Mosiah 15–17

'As Abinadi continued preaching to King Noah and his priests, he testified of Jesus Christ’s role as the Redeemer. One of Noah’s priests, Alma, believed Abinadi. King Noah cast Alma from his court and ordered his servants to slay him, but Alma escaped and recorded the teachings he had heard from Abinadi. After Abinadi delivered the message the Lord had sent him to share, King Noah and his priests threatened to kill him if he would not take back what he had said. Refusing to deny his testimony, he “suffered death by fire” and “sealed the truth of his words by his death”'. [Introduction from the online lesson at lds.org]