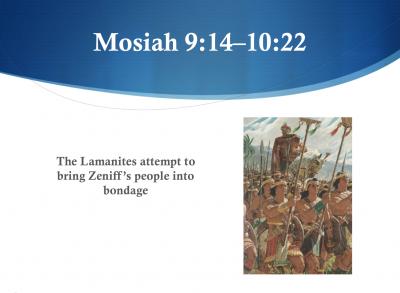 A 22-slide PowerPoint Presentation for the Seminary Lesson 57: Mosiah 9–10

A 22-slide PowerPoint Presentation for the Seminary Lesson 57: Mosiah 9–10

"A man named Zeniff led a group of Nephites from Zarahemla to settle among the Lamanites in the land of Nephi. Mosiah 9–22 contains an account of the experiences of these people. The king of the Lamanites allowed Zeniff’s people to settle among them because he secretly planned to bring them into bondage. The Lamanites’ false traditions and hatred of the Nephites eventually led to war. Zeniff’s people relied on the Lord for strength, and they were able to drive the Lamanites out of their land." [Introduction from the online lesson at lds.org]