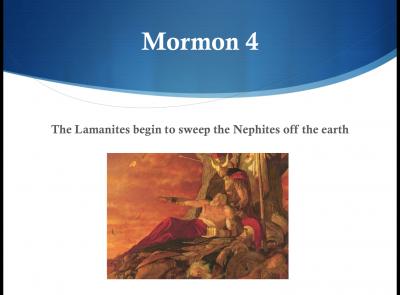 A 30-slide PowerPoint Presentation for the BofM Lesson 138: Mormon 3-4

A 30-slide PowerPoint Presentation for the BofM Lesson 138: Mormon 3-4

"After retaking their lands from the Lamanites, the Nephites prepared again for battle. Mormon pleaded with the Nephites to repent. Instead, they boasted in their own strength and swore to avenge their fallen brethren. Because the Lord had forbidden His people to seek revenge, Mormon refused to lead the Nephite army, and they were defeated. As the Nephites persisted in wickedness, God poured out His judgments upon them, and the Lamanites began to sweep them from the earth." [Introduction from the online lesson at churchofjesuschrist.org]