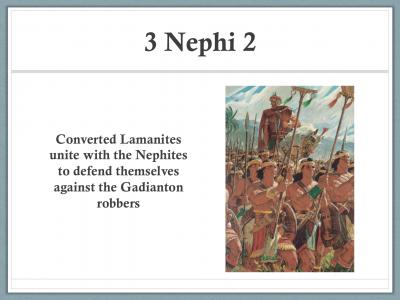 "After the people saw the sign of Jesus Christ’s birth, they began to be less astonished by signs, and they hardened their hearts. Many of the people rejected signs and wonders and increased in wickedness. The Gadianton robbers grew so strong that Nephites and Lamanites were compelled to take up arms against them. The converted Lamanites joined with the Nephites and became known as Nephites. Lachoneus, the chief judge of the Nephites, called on the people to repent and prepared them for battle. Because of their repentance, their faith in the Lord, and their diligent preparations, the Nephites triumphed over the Gadianton robbers. Following their deliverance, the people acknowledged the power of God in their preservation." [Introduction from the online lesson at churchofjesuschrist.org]