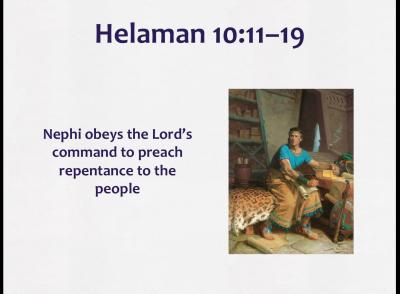 A 24-slide PowerPoint Presentation for the BofM Lesson 111: Helaman 10

A 24-slide PowerPoint Presentation for the BofM Lesson 111: Helaman 10

"The trial to determine who murdered the chief judge ended when Nephi’s revelation about the murderer was confirmed. Having escaped punishment from the false accusations that had been directed at him, Nephi began to walk home. He pondered what the Lord had shown him, feeling downcast because of the wickedness of the people. In this moment of reflection and sadness, he heard the voice of the Lord. The Lord blessed him with the sealing power and commanded him to continue preaching repentance to the people. Nephi immediately obeyed the Lord’s command." [Introduction from the online lesson at churchofjesuschrist.org]