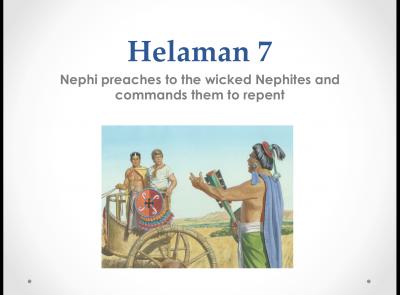 A 29-slide PowerPoint Presentation for the BofM Lesson 109: Helaman 6-7

A 29-slide PowerPoint Presentation for the BofM Lesson 109: Helaman 6-7

"Following Nephi and Lehi’s missionary efforts, the Lamanites increased in righteousness. However, the Nephites became wicked and began supporting the Gadianton robbers, and the Spirit of the Lord withdrew from them. Nephi prophesied that if the Nephites continued to live in wickedness, they would perish. He also prophesied that because of the Lamanites’ righteousness, the Lord would be merciful unto them and preserve them." [Introduction from the online lesson at churchofjesuschrist.org]