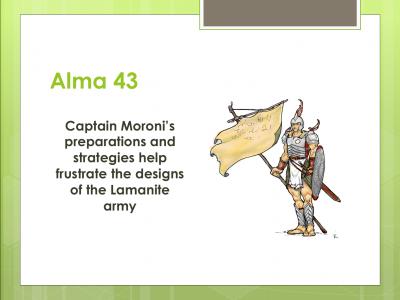 "As Alma and his sons continued to preach the gospel, the Zoramites joined with the Lamanite armies to attack the Nephites. Captain Moroni demonstrated faith and wisdom in leading the Nephites to defend themselves against the Lamanite army. When the Lamanites faced certain defeat, they made a covenant of peace and departed out of the land for a season. After Alma gave final instructions to his son Helaman, he departed from the people of Nephi and was never heard from again. After Amalickiah and a group of Nephite dissenters began trying to gain power over the Nephites, Captain Moroni raised the title of liberty among his people." [Introduction from the online lesson at churchofjesuschrist.org]