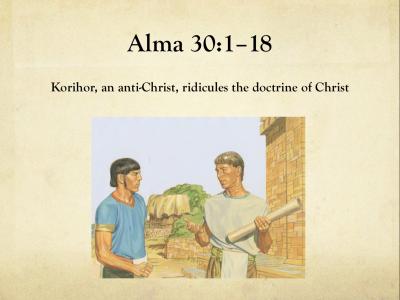 A 28-slide PowerPoint Presentation for the BofM Lesson 88: Alma 30

A 28-slide PowerPoint Presentation for the BofM Lesson 88: Alma 30

"Following a great battle between the Nephites and the Lamanites, peace settled over the land. About two years later, a man named Korihor began to preach that God did not exist, that there would be no Christ, and that there was no sin. He reviled the leaders of the Church, claiming they were teaching foolish traditions. His false teachings led many people to commit serious sins. Korihor was brought before Alma, who testified of Jesus Christ and taught that all things testify of a Supreme Creator. Eventually Korihor was struck dumb by the power of God and was convinced of the truth. However, when he asked to have his voice restored to him, Alma denied his request, saying that he would teach false doctrine again if he regained his voice. Korihor spent the rest of his life begging for food until he was trampled to death by a group of Nephite dissenters called the Zoramites." [Introduction from the online lesson at lds.org]